This excerpt is from the section on “precarious manhood” that describes the latest research on the concept of manhood and how it is a moving goalpost that impacts boys and men.

Excerpt from page 28, Helping Mothers be Closer to Their Sons 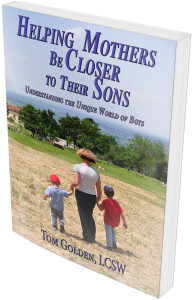 “When girls successfully go through puberty they are nearly always considered to be women. They have no need to prove their “womanhood” to anyone. It is simply accepted. Not so with boys. Boys may successfully navigate the physical side of puberty but this does not make them men. Manhood is something that he must prove. Repeatedly. Scientists have dubbed this phenomena “Precarious Manhood” and state that manhood is not a condition that comes about through biological maturation, rather, according to David Gilmore, it is a “precarious or artificial state that boys must win against powerful odds.”23 They have studied this around the world and say that this is nearly universal. In a wide range of cultures a boy often faces a difficult task to prove his manhood and even when he succeeds he must continue to prove his manhood throughout his life.

Generally at puberty and beyond boys are expected to prove their worth. According to a leading expert on this topic, Joseph Vandello, “manhood must be earned and maintained through publicly verifiable actions.”24   This unwritten mandate leaves men and boys anxious about proving themselves. Vandello’s research has shown that men are indeed more anxious over this than are women and that in response to being challenged are likely to exhibit risky or maladaptive behaviors.”