This is an excerpt from Tom’s ebook “The Way Men Heal.” This is a part of the section on tips for helping men. Links to purchase can be found on the right sidebar. 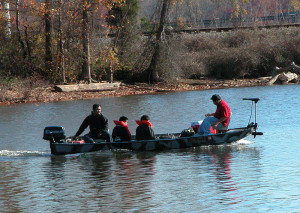 The first thing to keep in mind is to find some alternative to the traditional face to face talking about things mode.  Think about where he feels safe.  Maybe going for a walk together, or shooting baskets, or going fishing. If you don’t know how to shoot baskets or fish get him to teach you.  Going to a game together.  Simply doing something shoulder to shoulder. Being with him.  Women who are grieving like it when their friends or loved ones simply give them a place to interact.  Maybe the grief doesn’t even come up but the opportunity to interact is there and is appreciated.  Just as some women may not discuss their issues of loss in a conversation some men may not bring up their grief as you are doing something shoulder to shoulder.  Remember, two men can stay silent all day in a fishing boat shoulder to shoulder and at the end of day feel very connected and close.  They simply enjoy and are affirmed by each other’s company.  Keep that in mind as you join him in some shoulder to shoulder activity.

You know now that those who heal in a masculine way are likely to use honoring as a preferred way to heal.  Just as you respect him by being with him in a shoulder to shoulder space you can now experiment with healing in a similar manner.  Find ways to honor his loss. If it was his father who died, it could be as simple as donating some personal money to a charity that the father loved.  Let him know you have made the donation. It’s very likely that he will deeply appreciate it and will let him know that you and he are on the same team, working towards the same goal of honoring his father.

Honoring can take many different paths.  You could tell him, “Hey!  I want to take you out to dinner in honor of your father” and go to his favorite restaurant.  He can then decline if he needs to.  It may be too much for him right now and that would be fine.  Honor his choice.   Or he can accept.  Allow him either way. But he now knows for certain that you are interested in honoring his dad and that will likely resonate with him.  If you do go out it can be an evening to honor his father.  As you eat you can enjoy each others company.   Stories and the associated memories about his dad may come up.  But keep in mind that the focus should be on the dinner and enjoying yourselves, not on the conversation about his loss.  If he chooses to talk about his loss that would be gravy.

You could do the same thing by going to a sports event.  “Hey, I am taking you to Friday night’s playoff game in honor of your dad.  I know how much he loved the game and we could enjoy it in his honor.” Be sure that the game is the focus and not try to make it into a therapy session.  Just enjoy the game together and if the topic of his dad comes up the all the better. Think fishing boat.

Being The One To Open Up

Remember that honoring can be an everyday experience.  It could be something very simple like:  “You know, I was thinking of your dad yesterday and remembering how good he was with the kids.  I do miss that and miss him.”  In this scenario you are the one who is opening up, you are the one who is taking the risk. and he can just listen.  By being the one to bring things up you offer him a certain safety. He can choose to respond or not to respond but no matter which he chooses, he will likely be touched by your honoring his dad.

Another variation on this theme is to tell him a story about the person who died.  This makes it safe for him to just listen.  Men tend to appreciate stories like this and as the story is told his own memories are coming up and being healed.  “I was just thinking the other day about the time your dad and I went to the… ”

When you tell the old story you are the one who is opening up.  This gives him a safe way to hear what is happening to you and to let that resonate in his own psyche.  Rather than pummel him with questions you simply talk about the way you are feeling.  This offers him a model and also allows him to not say a word but to simply listen.  What I have found is that when we open up, it gives the man more of a safe place and the likelihood of his joining in with the conversation goes up.  But even if he doesn’t open up he will likely benefit from simply hearing the story.

Remember that men like to keep some of their father’s possessions, particularly some of their clothing.  They wear it in his honor  and in some ways are bringing his memory into the future.  It’s a part of healing from loss and men tend to not make a big deal over it.  I have seen the mistake too many times of the woman saying something like “Why are you wearing that tired old hat?” This is shaming and condemning his effort to honor his father.  A much better statement might be, “Every time I see you wear that hat I think of your father.”  Feel the difference?

Talk About His Action, Not His Emotion

In general, when you want to be of assistance to men who are healing you are better off  asking them about their actions rather than directly questioning their emotions.

Tom Golden, LCSW has written two books on the way men heal and has co-authored a third. Tom’s work has been featured in CBS Evening News, CNN, ESPN, The NFL Channel and many others. His latest book “The Way Men Heal” is available now at amazon as a kindle book. He offers online consults for women seeking to get closer to the men they love.  golden@webhealing.com