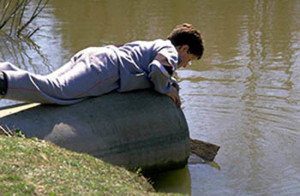 Boys face a very different world then their sisters.  We are all aware of the socialization that goes on even today that encourages boys to be a certain way.  William Pollack did a great job of laying out the many ways we socialize our boys in his best selling book Real Boys.  Be tough, be strong, don’t cry, never hit a girl and on and on.  Girls simply do not get a similar message.  Ever heard someone say to girls “never hit a boy?” I would bet not.   Slowly many people are starting to see this sort of sexism and are working to be more fair in their messages sent to boys.  Even with this, the tide is very strong.  Thoughtful parents may be able to control some of this at home but our boys are still getting this sort of message in public.  Not only that, there are other messages that we give our boys that many are not even aware of.  Here’s one.

It’s called the first separation from mother.  At about 2-4 years old the boy goes up to mom and puts his hand on her breast just as he has been doing for as long as he can remember.  But this time she takes his hand off and tells him not to do that!   The boy is dumbstruck.  Mom says “You can’t touch me there.” And he says back “But Suzie touches you there.” Mom says, “Suzie’s a girl.”  This doesn’t make sense to him. Simply because he is a boy he has been denied access to  his mother. He finds he can’t take baths with mom or even be in the bathroom with her.  He can’t do the stuff he has previously done to get close to mom.  He is cut off. This is a confusing time. He is now more alone and has to find new ways to get close. Most boys are disoriented by this but in time start developing skills to be close to mom.  He likely says to himself, “If I can’t be close by touching I will try something else!” So he starts a new strategy that centers around working to impress her somehow or even to protect her. He learns to come and go from mom and he learns to be more detached.  In some ways this is the beginnings of his striving for status that will be seen more clearly as he gets older. He seeks to impress mom in hopes of being close and being accepted and feeling like he belongs.  It is these very behaviors that come into play later in his life when he strives to impress his girlfriend, and later his wife. By impressing her he is repeating his old strategy and is increasing his chances of closeness and, of course, his reproductive success.

Think of how this experience socializes the young boy.  Does it link his actions and his success with his closeness and intimacy?  How does it impact his future intimacy? How can we find ways to alter our treatment of him in order to adjust for this experience?

These are all questions beyond the scope of this article.  The point here is that socialization is a powerful force that impacts our boys in a profound manner and sometimes even in ways that escape our awareness.  But there is more to what makes boys unique.  Biology.  We are living in a culture that ignores the biological underpinnings of our sexual differences.  In some ways the biology helps us understand the related socialization which only makes sense when we realize the automatic social cues we offer are actually in harmony with his biology.  Could it be that socialization and biology are working together to try and give our species the best shot at survival?  Maybe so.

Testosterone has a large impact on boys long before puberty. Before any socialization occurs our boys are meeting this powerful change agent. In the womb at about 2 months in utero boys  are flooded with testosterone.  This flood creates profound changes and alters his brain into what some scientists are calling the male brain or a “systemizing” brain.  This male brain is more likely to want to find patterns in systems and build them, dismantle them, or seek to understand them.  Think legos. The lack of a testosterone flood creates brains that are being dubbed feminine brains or empathic brains.  These brains prefer people  to systems.  Faces to things.  Importantly this flood of testosterone does not occur only for boys.  It is being estimated that about 17% of girls also get this experience and these girl’s brains then become “systemizing” just like most boys.  There is also about 17% of boys who don’t get this same testosterone flood and their brains are more the empathic brains.  Keep in mind that this is not a black and white difference.  Girls with empathic brains can still systemize and boys with a systemizing brain can still be empathic. But the male brain has the advantage when it comes to systems and the female brain has the advantage when it comes to empathy.  What is important for us to note is that even prior to birth our children are impacted by their biology and this impact plays out in their brain types and has profound impact upon their later post-natal psychology.

And what does testosterone do?   Well, in addition to what we have already discussed  increased testosterone has been shown to reduce fear, lower sensitivity to punishment, increase risk-tasking, encourage a striving for status, and enhance attention to threat.  All of these things have a fairly large impact on our psychological natures.  The world is far from a blank slate that is only related to the socialization we receive.  It is a very complex interplay of our biology and our socialization.

This sort of  information on testosterone in utero has been known in scientific journals for many years.  We have known for a long time but our academics and our media has failed to publicize these facts.  This lack of education has left many of us ignorant of the nature of the differences between men and women.  This is especially critical when it comes to boys.  All too often in today’s world people expect boys to be like girls when it comes to emotions and talking.  The assumption is that if our differences are only due to socialization the boys should simply learn a new way to talk about their feelings just like the girls do.  But this article starts to offer reasons why this is simply not going to work.  Boys and girls are different and it is a beautiful thing.

It’s worth noting that it is very rare that men are the ones to tell boys they are not dealing with their feelings.  Ever seen that?  Not usually.  The men have all had the experience of having been a boy.  They know.  They are much more willing to accept the boy as he is and not expect him to talk about his emotions.  The women however have no experience of growing up a boy and have been led to believe that their boys should be able to do things just like the girls if only they really wanted to!

Let’s summarize what this series has said about boys (and some girls) who have gotten the testosterone flood:

In the next article we will be looking to apply some of what we have learned and see how this can impact the ways we can be helpful to our boys.